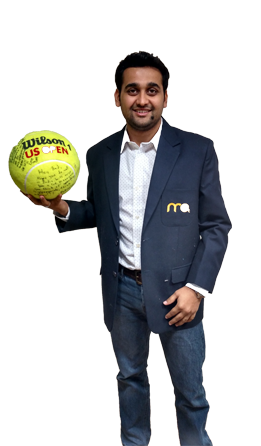 Raahil Dhruva, born in Mumbai was an active child right from a young age, playing at inter- school, inter-district and inter-state competitions, Raahil was a champion across multiple sports like tennis, football, running, swimming and more. Since the move of his family to the UK at age 10, Raahil continued pursuing his passion for tennis and with the help of excellent school programs, he was able to thrive and better his game. To continue playing at a professional level, Raahil trained at the Sutton Tennis Academy to help achieve his goal to play tennis, representing India at world tournaments.

After multiple victories, Raahil wanted the same kind of opportunity he was given available to more students in India and therefore went on to study BSc. Entrepreneurship with a minor in Corporate Communications and Finance, at Queens University – Charlotte, North Carolina on a tennis scholarship where he represented his university for tournaments across the USA and reached a ranking of 12 in doubles in the NCAA tournaments.

Raahil has always believed in a good balance between education and an active lifestyle and is trying to inculcate this in all the schools he works with. MQ, started with his vision, to make every student an active student, in their day, in society and throughout their lives.